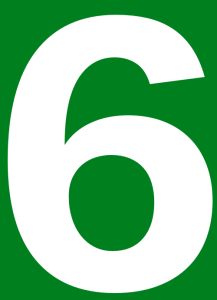 This brief supplementary post considers the Level 6 test results – in reading, in maths and in grammar, punctuation and spelling (GPS) – and how they compare with Level 6 outcomes in 2012 and 2013.

An earlier post, A Closer Look at Level 6, published in May 2014, provides a fuller analysis of these earlier results.

Those not familiar with the 2014 L6 test materials can consult the papers, mark schemes and level thresholds at these links:

Entry levels for the 2014 Level 6 tests were published in the media in May 2014. Chart 1 below shows the number of entries for each test since 2012 (2013 in the case of GPS). These figures are for all schools, independent as well as state-funded. 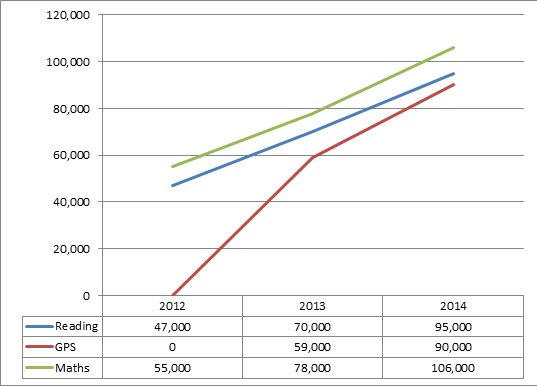 The available information for Civitas’ funding is rather different from that for Policy Exchange. Whereas PX acknowledges individual funders in its reports but provides little information elsewhere, Civitas publications, if they mention funding at all, tend to have a blanket statement:

‘Civitas is financed from a variety of private sources to avoid over-reliance on any single small group of donors.’

So it is not possible to say that any particular funder has more or less connection with Civitas’ education-related publications. However, Civitas supplied a mostly anonymized list of funders for 2011 to WhoFundsYou which is available here; just over two thirds of the funding listed for that year came from the Reece Foundation in three separate donations. The Reece Foundation was founded by Alan Reece, who died in December 2012; its stated main interests are in supporting and improving education in maths, physics, and engineering.

Powerbase’s entry for Civitas is here, and Civitas lists its education-related publications here. Between them, Policy Exchange and Civitas are a very powerful force in the shaping of current educational policy. It is worth noting that Tristram Hunt has written for them in the past.

NB Civitas Schools runs as a separate financial entity., and I’m awaiting clarification from Civitas of the formal relationship (or indeed whether there is one). Information on funding of Civitas Schools is here.

These are Policy Exchange’s education-related publications as given on their site. I have listed them most recent first.

[Edited to add:Laura McInerney pointed me to this useful summary of information about Policy Exchange, just for some context.]

I asked Jonathan Simons about transparency of funding, and he responded in a series of tweets which I’ve combined together here:

‘Any donor can give money to a report, to an event, to general, or a combination. We don’t take commissions or public cash; all our work is editorially independent and complies with charity law. Obv we’re audited every year and a/c published on web. in general, charity commission rules allow for charity doors to choose whether to be declared or not. Trustees of PX need to be assured they ‘know, the donor (money laundering) and its a legitimate donation – due diligence – and charity rules don’t allow for any donor of any charity to direct its activities. This is crawled over by auditors.’

So I take it from this that named funders on any report as listed below are not necessarily the only people to have funded it (although they might be). JS emphasises that funders are not allowed to dictate what a charitable organization such as PX does.

Of course, they’re unlikely to donate to an organization that’s doing something they don’t like…!

NB Although when I first asked Jonathan Simons about who funds Policy Exchange, he said (again via Twitter, hence truncated wording) ‘Look on the acknowledge page of reports, it’s set out there.’ I’ve found various instances where funders do not in fact seem to be named in the publication.  In those cases, unless I’ve missed a mention elsewhere, I suppose a completely anonymous funding source must be assumed.

It’s understandable for private individuals to want to remain private. And it’s no surprise if the people or organizations donating funds are mostly very wealthy – or that their wealth will tend to have been acquired through business or financial activity. But this does mean that policy is heavily influenced by organizations such as PX, which are in turn dependent upon these sets of interests for their existence. I should note that some funders appear donate to more than one think tank, sometimes across a broad political spectrum. The structural issue of anonymous funding seems to me to go deeper than party politics. It bothers me.

The title of each contains a link to the associated PX page, and the names or organizations given are those who appear to have contributed to the funding of each publication. They are not the authors.

‘Centres of Excellence‘ The Hadley Trust

‘Technical Matters‘ Cambridge Assessment, the Association of Colleges and David Meller (thanked for support: not clear whether financial or other)

‘Room at the Top‘ Not explicitly stated but implied: ‘King Abdulaziz and his Companions Foundation for Giftedness and Creativity’

‘Higher Education in the Age of Austerity: Shared Services…‘ Funders not explicitly named. See acknowledgments at end of publication for ‘support’, which presumably includes some financial and some other.

‘Higher Education in the Age of Austerity:The Role of Private Providers‘ No funders explicitly named. Acknowledgements (p. 4) seem to refer to advice or similar rather than financial support.

‘More Fees Please?‘ Thanks ‘our consortium of donors’ – no explicit names

This reply from TKAT (8th April 2014) is very helpful in illustrating the kinds of arrangements which exist, and the legal constraints on transfers of school land freeholds:

Please find below a summary of the how TKAT holds the school sites for its academies:

• There is one TKAT academy where TKAT holds the freehold of part of the site and part of the site is held under a 125 Year Lease (due to amalgamation of two different categories of school to form a single primary academy).

• There is one TKAT academy where the school site is held under a Tenancy at Will pending grant of a 125 year lease (due to Local Authority registering freehold of land).

• There is one TKAT academy where the school site is held under a short lease pending grant of a 125 year lease (due to Local Authority carrying out development works).

• TKAT holds one school site under a Land Supplemental Agreement (due to this being a church school and land being retained by trustees and occupied by TKAT by way of a licence to occupy).

TKAT cannot lease land to any of its Academies as these are not separate legal entities and are therefore unable to hold land themselves.

Please note the manner in which each school site is transferred to TKAT when the school converts to academy status is governed by the Academies Act 2010 and the DfE’s Land Transfer Advice and the prior approval of the DfE must be obtained. The manner of transfer is determined by the type of School and the land arrangements in place prior to conversion. The freehold of a school site has only transferred to TKAT where it was previously held by the Governing Body of the school not where the freehold is held by the Local Authority. Where the freehold of land is transferred a restriction must be entered against the title at the Land Registry to prevent any disposal without the prior consent of the Secretary of State for Education.

Please find a link to the DfE’s Land Transfer Advice here which you may find useful – https://www.gov.uk/government/uploads/system/uploads/attachment_data/file/254887/land_transfer_advice_april_2013.pdf.

I’ve had a response from Oxfordshire County Council (1/4/2014), which shows that across the county many schools are either leased from the LA or from a previous Foundation Trust; the main exception to this is in the case of C of E and Roman Catholic schools, where OCC may (as noted below) own the playing fields and lease them to a school, but the other land belongs to another body (presumably, the relevant diocese, although I have yet to investigate this). I have copied below the full text of the document sent to me by OCC:

“Freehold of land for academies in Oxfordshire

trust for all of part of the site for the following schools:

OCC do not own freehold of most of the school site for the following schools. (In

the academy trust on a 125 year academy lease.):

NB: In both cases there may be areas of the school site which are either excluded

from the academy transfer i.e. freehold ownership by OCC was retained, or a

sublease was granted back to OCC for an area of the site.

OCC do not own the freehold of most or all of the site of previous Foundation Trust:

own land and building, except playing field which is part trustees owned, part OCC

I have also now had a swift and helpful response from United Learning:

‘To the best of my knowledge our Academies listed..are on 125 year leases with LA’s except for William Hulme which was previously an Independent School and Glenmoor and Winton which were previously Foundation Schools.’

The reply lists each school together with information about its lease:

So far I have had responses from ARK and Harris, both of which bear out the DfE’s explanation.

‘We have 27 open Free Schools and Academies. Of these only 5 have sites which are owned rather than leased. All of these except one are owned because the schools which became Academies owned their sites before conversion as Foundation Schools, so these sites were already out of LA control before conversion to an academy. The fifth one is a Free School which we have opened on a site we already owned. When an Academy Trust owns a site the DFE build into Funding Agreements restrictions that no disposal of the site can take place without Secretary of State agreement and this is registered as a notice on the registration of the site at Land Registry.’

I shall add more information as and when it seems useful!

[Note: Much of the original content of this first post seemed more useful in the ‘About’ section, so that I can update the overview as I find out more. So I’ve moved it  there.]